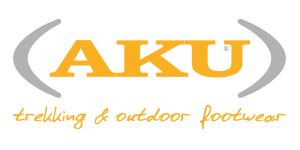 AKU is a reputable Italian brand specialized in the manufacturing of high quality trekking and outdoor shoes. AKU history is based on many years of gradual development; founded on connection between a prestigious tradition of hand -made footwear manufacturing and development of modern technologies. AKU is known as the first brand that incorporated an innovative technique of lining Gore-Tex® membrane. It led to the creation of fully waterproof shoes. Despite deriving from tradition and local inspirations, AKU believes in active development and aims at strengthening its position in the new outlets. Currently the company owns two large factories in Italy and Romania. They release in the world market more than 200,000 pairs of shoes every year. Moreover, AKU as the first and the only one – at the moment – company in the outdoor footwear sector which has counted, declared and certified environmental impact in the context of production of the flagship Bellamont Plus model. Information from the calculations – realized according with the International EPD® System – has revealed areas of greatest impact and allowed to reduce the effects of negative impact of production on the natural environment.